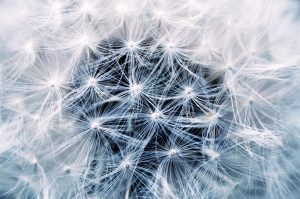 An All-Natural Approach to Quenching Seasonal Allergies For Good

It was early April when photographer and storm-chaser Jeremy Gilchrist sent his drone skyward to capture a thick, choking, yellow-green haze over North Carolina — a “pollmageddon” of spring pollens. He then posted the photos to Facebook, where they went viral and were picked up by news media. As the Washington Post noted, “This pollen cloud is real, and it’s spectacular — unless, of course, you’re someone who likes to breathe.” The haze was so thick a weather sensor mistook the pollen for clouds.

The “pollen tsunami”, as NBC News calls the 2019 pollen counts—was just one more sign that, as climate change warms up our planet, allergy season is getting longer, stronger, even brutal at times. And with it, allergy symptoms are skyrocketing. As reported in Lancet Planetary Health, pollen counts are rising around the world as our carbon footprint increases and temperatures climb. Carbon dioxide is a nutrient for plants, and it has risen from 280 parts per million before the industrial revolution, to about 400 ppm today. That has doubled pollen production of, for instance, ragweed.[1] Ragweed can drift as far as 400 miles out to sea and two miles high. And overall, pollen counts today are projected to double by the year 2040.[2]

Right now, about 50 million Americans suffer from allergies and the myriad of symptoms they bring, according to the American College of Allergy, Asthma, and Immunology. And we’re not just talking pollen—allergies to insect bites, dust, food, molds, and medications have also been rising over the past half century.[3] Food allergies have shot up 50% in children since 1997. According to a report by Vox, allergies cost the U.S. up to $11.2 billion each year in medical expenses, and asthma attacks lead to 20,000 emergency room visits each year.

Common allergy symptoms include fatigue, hay fever with its hallmark runny nose, itchy eyes and congestion; nasal and postnasal drip; tummy upset and even nausea; rashes or eczema, asthma, and even moodiness and depression. If allergies are not treated, they can become chronic. Chronic allergies are marked by large numbers of immune cells at the affected site (such as the nose, eyes or lungs) and even structural changes in the affected tissues. This is why it’s supremely important to tackle allergies as soon as they arise.[4]

According to pediatric allergist Alessandro Fiocchi, Editor-in-Chief of the World Allergy Organization Journal, we are seeing “an increasing number of patients, increasing complexity of cases, and new allergic pathologies. As a reader of the allergy literature, I would have hardly imagined 25 years ago that in 2012 we would have 23 indexed allergy journals.”[5]

In addition, intolerances and sensitivities are also on the rise.  These are not strictly mediated by IgE, but result in a similar, inflammatory response.[6]

Allergy symptoms occur when an antibody called immunoglobulin E, or IgE, is activated. IgE then activates two other immune cells—mast cells and basophils—which release a floodtide of inflammatory chemicals intended to expel the offender through the typical cough, runny eyes, runny nose, sneezing and more. This response may have saved us back in the day when we were subjected to snakebites or our water and food contained parasites. But in the modern hygiene-obsessed world, our bodies send out this floodtide of molecules in response to pollens that don’t actually harm us, or foods that might be good for us, or simple dust and common molds that have been on the planet for millennia.

Mast cells play a powerful role in allergies and in overall inflammation. When primed by IgE, mast cells release granules and powerful inflammatory molecules such as histamine, cytokines, leukotrienes, and more. Many medications attempt to treat allergy symptoms by blocking these substances (leukotriene inhibitors and antihistamines).[7]  Though prescription and over-the-counter medications are popular, they are not ideal. They do not support the body and bring it back into balance. Read on for natural approaches that not only calm the allergic cascade, but support the body in multiple ways.

Flavonoids are found in almost all fruits and vegetables, and help lend them vivid hues, such as purple, orange, blue, and yellow. Quercetin and luteolin are potent antioxidant flavonoids, polyphenolic plant compounds that can quiet mast cell activity and histamine release.

Quercetin is a flavonol, a plant pigment found naturally in apples, onions, broccoli, berries, grapes, spinach, kale, and more. Quercetin contains glycosides and other flavonoids, like kaempferol and myricetin, that have been shown to be anti-viral, anti-microbial, anti-inflammatory and anti-allergic.[8] Quercetin is both a powerful antihistamine and anti-inflammatory and is one of the most widely used bioflavonoids for inflammatory disorders.[9] Quercetin has proven effective in asthma and allergic rhinitis.[10]

Luteolin is a flavone, and is an even more potent anti-allergic flavonoid than quercetin, found in foods such as spinach, celery, carrots, olive oil, artichokes, and peppermint. It works well when paired with quercetin, offering similar anti-inflammatory activity, reducing mast cell activity and the release of histamine, inhibiting allergic symptoms, reducing mucus production, and even quieting gene activity that increases inflammation.[11],[12]  In animal studies, luteolin markedly lessened scratching, itching and vascular permeability.[13] Luteolin dramatically reduces mucus production, in part by binding to the GABA-A receptors which normally stimulate mucus production.[14] Luteolin suppresses inflammatory molecules such as TNF-a and IL6.[15] Researchers have concluded that luteolin is uniquely anti-inflammatory, anti-oxidative and neuroprotective.[16]

Together, luteolin and quercetin may have a synergistic effect. A study of 37 children on the autism spectrum (29 boys and 8 girls, aged 4-14 years) found that capsules containing 200 milligrams of luteolin and quercetin taken for four weeks significantly improved gastrointestinal and allergy symptoms in three-quarter of the children. Eye contact and attention were improved in 50% of the children as well, and an astonishing 10% of children resumed speaking simply by taking these flavonoids daily.[18]

Both luteolin and quercetin have been called 21st century mast-cell stabilizers.[19] Together, they may go a long way toward reducing or eliminating allergy symptoms, while improving inflammation throughout the body.

Add DIM (Diindolylmethane): It Turns Down Inflammation, With A Particular Affinity for Women

DIM (diindolylmethane) is a remarkable molecule that turns down inflammation in the body[20], supports normal and healthy estrogen metabolism, and increases our internal, endogenous antioxidant production. We readily form DIM during the digestion of cruciferous vegetables like broccoli, cauliflower, Brussels sprouts and more. DIM is also increased in crucifers by cooking, which activates an enzyme (myrosinase) responsible for its conversion.[21]

In addition, DIM stimulates our own internal antioxidant switch, called Nrf2 (Nuclear factor erythroid-derived 2-like 2). Nrf2 orchestrates antioxidant, de­toxification, and cellular defenses. When activated, Nrf2 can switch on over 200 genes that help the cell generate its own highly pro­tective molecules. These mol­ecules are critical in the metab­olism of toxins and drugs. They protect against oxidative stress and inflammation, remove dam­aged proteins, and initiate DNA repair.[25],[26]  Some scientists think that the pro­tective role of Nrf2 ac­tively determines longevity and healthspan.[27]

Vitamin C Is Still The Golden Oldie, And For Good Reason

Vitamin C is our most popular antioxidant, a universal healer beloved by two-time Nobel Prize winner Linus Pauling.[28] In everything from oranges to lemons to exotic berries like camu-camu, Vitamin C’s extraordinary and diverse benefits show just how versatile this simple, water-soluble molecule really is. The vitamin first came to our attention with the discovery that it could prevent the fatal disease scurvy in 18th century sailors. Vitamin C—also known as ascorbic acid—is a water soluble molecule and because we don’t make any, it must be obtained from our diet or from supplements. Vitamin C has been shown to be important in immune function, wound healing, mood, allergy symptoms, and more.[29],[30],[31]

Vitamin C is one of the most powerful water-soluble antioxidants in the body.[32] It quenches free radicals, reduces lipid peroxidation of cell membranes, and supports vitamin E and glutathione.[33],[34] It is essential for collagen synthesis.[35]

Most importantly vitamin C depletion has been correlated with allergic symptoms and with the circulation of excess histamine in the blood.[36] When individuals are placed on a diet low in vitamin C, histamine levels in the blood rise significantly, and when they are given vitamin C supplements, the histamine levels drop.[37] A deficiency of vitamins C and D may be linked to bronchial asthma.[38] Intravenous vitamin C has been shown to substantially decrease allergy symptoms, in a ten-year, multicenter observational study in 71 patients with allergy-related respiratory or skin issues.[39]

It’s ideal to begin a well-rounded supplement program before allergy season begins. In addition, it’s important to take a look at diet, since individuals sensitive to airborne allergens may also react to certain foods. Make sure to eat generous helpings of foods high in flavonoids and vitamin C, including dark green, leafy veggies; deep yellow, orange, purple, red fruits and veggies; beets, onions, garlic, ginger, and cayenne. Ginger and cayenne will open the breathing passages. The time to start is now, long before pollen counts double in 2040!

Autoimmune Diseases Are On The Rise