Can You Reap the Rewards of Keto Without the Downsides? 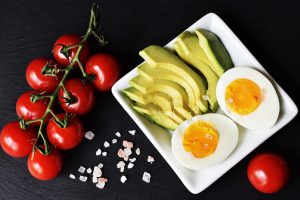 Pros and Cons of a Ketogenic Diet and How to Achieve Fast, Flexible Ketosis

You know a new dietary era has dawned when Weight Watchers—once the most popular food plan ever created, the one that ranks first as the Best Weight-Loss Diet, Best Commercial Diet Plan, and the Easiest Diet to Follow—is tumbling down the food plan sweepstakes. A new way of eating has taken America by storm—the ketogenic diet, also known simply as “keto”. “Over the last fifteen years,” writes pediatric neurologist James Wheless, of the University of Tennessee, “there has been an explosion in the use, and scientific interest in, the ketogenic diet.”[1] Weight Watcher’s CEO Mindy Grossman agrees: “Keto is becoming a cultural mean,” she admits, adding that we are experiencing a nationwide “keto surge.” Since keto can be a challenging diet for some, its sustained popularity indicates that its rewards must be great (indeed, they are—just read on to see).  An ideal ketogenic diet is high in healthy fats, moderate in protein, and very low in carbohydrates. This diet, by limiting the fuels you usually rely on, triggers your body’s ancient ability to go into a metabolic state called ketosis. In this state the body becomes incredibly efficient at burning fat for energy. Moreover, it turns fat into compounds called ketones in your liver, which your liver then releases to circulate throughout the body. Any cell can grab these ketones, and they are a particularly rich energy source for our energy-hungry brains. Some scientists now call ketones the fourth energy source for humans (in addition to carbohydrates, fats and proteins. Within 72 hours of fasting, your body moves into ketosis. A ketogenic diet is known to stimulate the same pathways as fasting.[2],[3] One of the great scientists and thinkers of the modern day, geneticist David Sinclair, PhD, of Harvard Medical School, has coined the idea of “metabolic summer” and “metabolic winter.” In summer we feast, in winter we fast. In modern society, he suggests, we indulge in a perpetual summer of overnutrition and overfeeding, which has contributed to many common diseases and conditions.[4] We’ve forgotten to fast. The health impact of fasting and caloric restriction are well known, including lower levels of oxidative stress, improved metabolism, and longevity.[5] Fasting or intermittent fasting has been recognized as a valid treatment for several thousand years, and was recorded as a therapy for epilepsy by Hippocrates. The average person on the standard American diet eats around 225-325 grams of carbohydrates every day.[6] Reducing calories by 30-40% triggers a network of genes that have evolved to protect us when food supplies are limited. The keto diet is truly a therapeutic diet—in fact, it has been studied for epilepsy since the 1920’s.[7] Read on to discover just what that amazing network of genes, and a ketogenic diet, can do.

Many people first hear of keto because someone they know lost weight on the diet—and without counting calories. In one six month study of 120 individuals who were overweight and suffered from high cholesterol, the ketogenic diet was superior to a low-fat diet. Individuals following keto (consuming less than 20 grams of carbohydrates a day),  lost more weight without counting calories, while those on the low-fat diet had to eat less than 1000 calories a day.[8] A 2014 research found the ketogenic diet successful in treating obesity as well, helping improve cravings and hunger, and increase fat metabolism.[9]  A study on 53 obese but generally healthy women found that the very low carbohydrate diet group lost more weight and more body fat than the low-fat diet group.[10] In addition, cutting carbs leads your body to retain less water.

The high fat, low-carb ketogenic diet reduces carbohydrate craving, and even suppress appetite, leading to greater feelings of fullness and satiety, and a reduced desire to eat.[11] It does so in several ways. It does so by cutting down on carbs, so that blood sugar stays more constant. Secondly, ketones actually suppress appetite, and control hunger and satiety (fullness). Ketones do this by modulating production of two hormones, cholecystokinin (CCK) and ghrelin. CCK helps you feel full.[12] Ghrelin, in turn, increases appetite. Normally, when we lose weight, ghrelin levels increase—stimulating us to eat more. But ketosis suppresses that increase in ghrelin.[13]

Long-term keto dieters often report increased focus, clarity and energy. Because they are not experiencing blood sugar swings, energy feels more sustained. In addition in ketosis the brain starts relying on ketones for energy instead of glucose. Ketones are an exceptionally potent fuel source that contributes significantly to cerebral metabolism.[14] They are thought to be neuroprotective, and can support both learning and memory.[15] In one study, those on a low-carb diet responded faster during a task demanding attention and vigilance, than those on a standard low-calorie diet for diabetics.[16] Eliminating carbs can also help control and stabilize blood sugar levels. This may further increase focus and improve brain function.

A ketogenic diet is known to dramatically reduce insulin and blood sugar levels.[17] It improves all aspects of the well-known “metabolic syndrome” condition, which is thought to be a precursor to diabetes, and improves blood lipids, triglycerides and fasting blood glucose levels.[18] Metabolic syndrome includes high blood pressure, high cholesterol, excess fat especially around the abdomen, and high blood sugar.[19] Type 2 diabetes, which often follows metabolic syndrome, can also be helped by a ketogenic diet, which reduces insulin resistance or even clear it up entirely.[20] Over seventy percent of diabetic patients on a keto diet have lost weight and reduced the need for insulin. Ketosis can help keep blood sugar in a healthy range.[21],[22] In one study of 28 overweight participants with type 2 diabetes for a 16-week, almost all participants reduced or eliminated their medications.[23]

A ketogenic diet can lead to lowered blood pressure and an improvement in cholesterol, as well as higher amounts of the ‘good’ HDL cholesterol.[24]

The ketogenic diet is well known for supporting lean muscle mass and enhancing endurance. [25],[26],[27],[28]  In one study of cycling ability, those on a high fat, low carbohydrate diet were able to exercise significantly longer before they became exhausted. They experienced enhanced endurance and resistance to fatigue.[29] Athletes following a keto diet have maintained tissue repair at the same rate as athletes on a high carbohydrate diet, while their endurance was actually increased. Endurance athletes on a keto diet for at least 9 months were able to burn fat more efficiently than carbohydrate adapted athletes. And for the extreme athletes—such as ultra-marathoners– long-term keto-adaptation resulted in “extraordinarily high rates of fat oxidation, whereas muscle glycogen utilization and repletion patterns during and after a 3-hour run are similar.”[30]

May Improve Many Neurodegenerative Conditions

Numerous neurodegenerative diseases share common features, such as inflammation, oxidative stress, mitochondrial dysfunction, and impaired metabolism, insulin resistance, and the ketogenic diet may positively impact these conditions.[31],[32] The benefits of the keto diet have been studied in an astonishing range of conditions, from pediatric and adult epilepsy[33],[34],[35] to polycystic ovary syndrome[36], acne[37], pain[38], Parkinson’s disease and Alzheimer’s disease[39],[40],[41],[42],[43],[44],[45]

Activates a Powerful Network of Longevity and Immune-Boosting Genes

As David Sinclair has pointed out, “Calorie restriction without malnutrition is considered the gold standard in biogerontology as the most robust way to delay aging and age-related diseases.”5 The ketogenic diet can activate a universal ancient pathway, present in all complex life, called AMP activated protein kinase (AMPK). AMPK helps regulate metabolism, growth and energy. It is an exquisite sensor for energetic stress and low energy. It can stimulate receptors involved in health and longevity, help lower inflammation, improve insulin sensitivity and enhance muscle performance and contraction. AMPK is key to the regulation of many important pathways, ones that stimulate powerful internal cleansing processes, and stimulate the formation of new mitochondria. Mitochondria are the powerhouses inside all our cells, our little workhorses that perpetually produce energy.[46],[47]

What Could Be the Downside?

By now you may be wondering how, with so many promising (if not outright amazing) benefits, from weight loss to sustained energy to improved cognition…what could be the downside? Perhaps the biggest downside is that a ketogenic diet can be tough to initiate and tough to sustain. Adopting this type of food plan requires an adaptation process. Getting keto or “fat” adapted can take one to two weeks if you follow traditional methods. In addition, learning what foods you can eat and what meals you can plan takes time and energy, especially in the beginning. Resolve can waver because we live in a carbohydrate-addicted society, and delicious baked goods, pastas, cakes, cookies, muffins, biscuits, breads and more seem to beckon on every street corner. You can get “keto flu” in the first few weeks. These flu-like symptoms include headaches, fatigue, nausea, irritability, and possibly loss of electrolytes because you are losing “water ”weight. Your body also needs time to adjust to a dramatic increase in fats along with a decrease in carbohydrates. Gut issues during this adjustment period can include irritable bowel syndrome, as well as some nausea until the gallbladder, liver and pancreas adjust to the increased amount of fat.[48] Another downside is following keto by eating too many “unhealthy fats”. Though bacon and butter, sausage and steak may be delicious, healthy fats from wild fish, nuts, avocados, and other foods are an important part of a ketogenic diet. You need to plan ahead when eating out. When dining out at restaurants, careful attention to the menu is important. Social events also require more discipline, as carbohydrate-rich cakes, cookies, pasta and more may be present. Alcohol will need to be limited to low-carb dry wines and clear spirits such as vodka, gin, and tequila—all in moderation. You’ll miss out on many heart and gut-healthy foods. Many plant-based healthy nutrients will be limited, such as the resistant starch in beans (which feeds your gut cells), the soluble and insoluble fiber in vegetables, the micronutrients in most fruits and vegetables. A healthy gut microbiome and lifestyle do depend in part on the rich array of phytonutrients available to us in the plant world—but many of those plants have more carbohydrates.

Can You Have the Benefits Without the Pitfalls?

Wouldn’t it be nice to have the best of both worlds? To have a diet that promotes all the healthy aspects of keto—while retaining dietary flexibility? To go into ketosis and yet somehow be able to include all the healthy, delicious complex carbohydrates, fruits and phytonutrient-packed vegetables that are so strongly correlated with long life and reduced risk of disease? What would flexible ketosis look like? Can we gain the benefits, without the downsides? In Part 2 of this blog, we discuss just this: ‘hacking’ the keto hack, to have our “keto cake” and eat it, too.   You May Also Be Interested In: Signs Your Liver Needs a Detox Are You Ready for a New You? Eight Ways to a Healthy Heart